For the Record – Fighting for women in construction 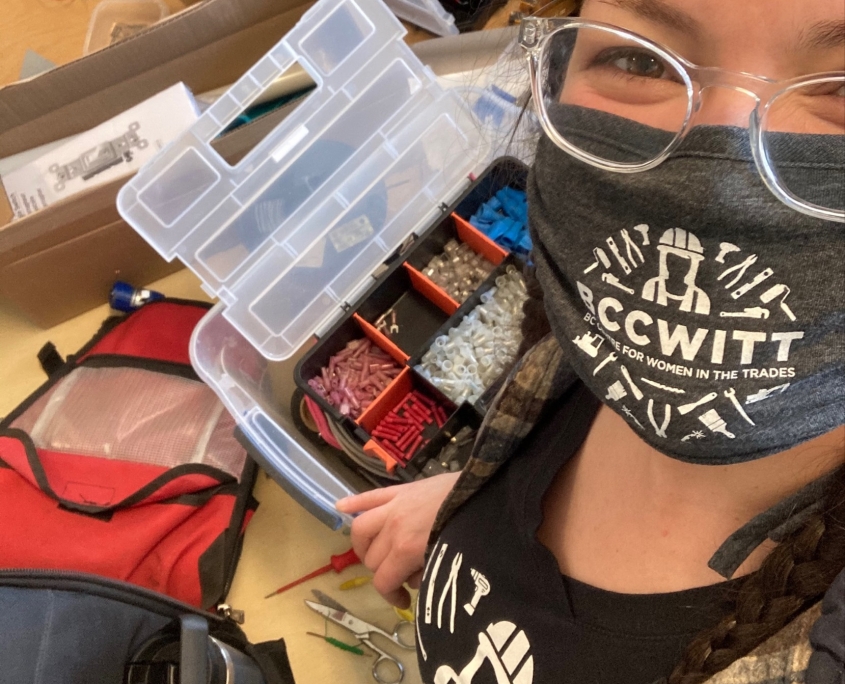 Lindsay Kearns teaches a workshop for middle school aged girls for BCCWITT in partnership with the Construction Foundation of BC.

Lindsay Kearns is a Red Seal certified electrician with over ten years experience, so it is no surprise that she has first hand experience of the negative stereotypes rampant in the construction industry.

Kearns says that women on job sites are always hyperaware of how their behaviour will be perceived by their male colleagues and supervisors.

“Often you’re the only woman on a site or on your crew if there is another woman there you really hesitate to go and speak to them because there’s a very sexist stereotype as women being very chatty.” – Lindsay Kearns, Coordinator, BC Centre for Women in the Trades

The irony, Kearns says, is that women or no women present, job sites are full of workplace chatter when people should instead be working.

Nevertheless, Kearns says that no matter how false a stereotype may be, it’s just one factor driving women out of construction – despite the fact that there is currently a shortage of skilled trades in British Columbia. In fact, women only represent four per cent of skilled trades workers in the province, according to BCCWITT, a number that has not changed much in years.

Kearns is also Coordinator for the BC Centre for Women in the Trades (BCCWITT), an organization fighting for better representation of women in the industry. She says the isolation women experience on job sites is just part of the toxic work environment women face in construction.

That toxic environment is one of three main factors that push women out of the industry, according to the BCCWITT. The other reasons are a lack of opportunities for advancement and a lack of a community of peers. These issues are all pillars BCCWITT is addressing, along with providing a career support system.

Kearns adds it’s not just women who will benefit from a female presence on job sites. She says what is considered “women’s issues” can often actually apply to everyone on a job site.

“Once these conversations start it’s never just about women…Once we have more women working in construction who are pregnant and then leaving it opens up the conversation about family leave.” – Lindsay Kearns, Coordinator, BC Centre for Women in the Trades

Kearns says it’s not typical for men to take family leave but the opportunity to ask comes up once a female colleague comes back to work after taking maternity leave. She says this is just one area where BCCWITT advocacy benefits everyone on a job site.

Kearns says the toxic environment on work sites is still an issue but she is optimistic in the future of women in the trades. She says she encourages male leaders in the industry to take the Be More than a Bystander training program offered by BCCWITT in order to help make that change.